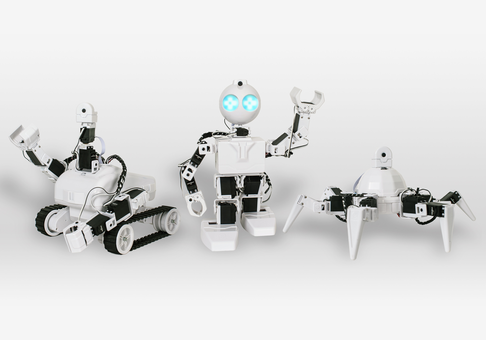 EZ-Robot is the world's most powerful, versatile, and easy-to-use robot platform.

It's a "real-world" robotics platform that is used in industry every day, and it teaches students real-world robotics, including traditional style programming.  That said, it's also so easy-to-use that 4th graders can build and program powerful robots with advanced features such as speech recognition and visual tracking.

Students can program the robots with a Scratch-like interface, through an intuitive GUI (graphic user interface), Blockly, or with C++, C# or visual basic.

I've demonstrated EZ-Robots to more than 18,000 students, and following my presentation 90% of ALL students indicate that they would like to learn robotics (which includes traditional style programming).

It's truly remarkable to see.

Regardless of the what grades the students are in, the result is the same.  EZ-Robot inspires and engages students.  The platform is also so versatile that it can meet students at their individual inspiration point.  If you have a student who is interested in self-balancing boards, they can use the EZ-Robot platform to create self-balancing boards.  If their grandma is in a lodge, and they want to program a robotic companion (that can recognize their grandma's emotions), then they can learn robotics that way.

There are students building real-world robotic applications such as snow-shoveling robots, dresses for fashion shows, and submarine robots.  There is virtually no limit to what can be done.

... and when you understand the impact that robotics will have on the workforce, it's critical that ALL our students learn robotics, not just the top 2% - 5%.  With EZ-Robot, all your students will be interested in learning robotics and programming.

Click below to see a video that was filmed at an after-school session with some grade 7 and 8 students that had just seen EZ-Robot for the first time.  It presentation started at 3:15 and was scheduled to run for 45 minutes.  At 4:00, I told the students that the presentation was done, and they could go... but that I had some robots with me, if they wanted to get a chance to program them.

At 6:00pm I eventually had to kick the students out and tell the students to go home.  Literally 100% of them stayed to "play with the robots" for almost 3 hours.  They were all having so much fun, they didn't even realize that they were learning.